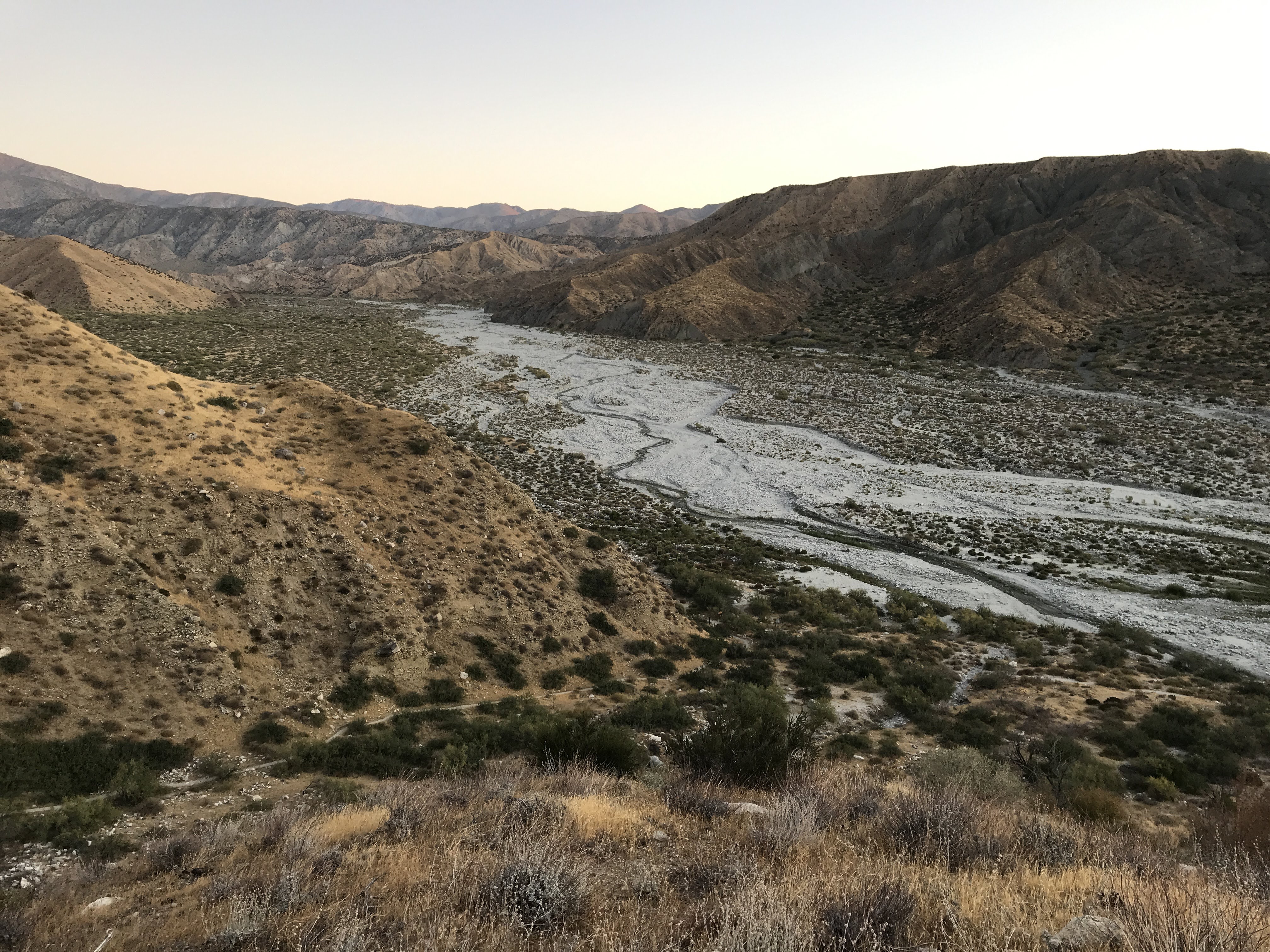 I parked the car at the 10 freeway at Cottonwood Rd, Cabazon. The PCT crosses here, and it’s where I’d left off on the last section. It was about 5pm when I started hiking up towards the Mesa Wind Farm. At this time of year sunset is around 6:20pm so I didn’t have much time to find a spot. I found a protected nook in a dry wash in between some rocks and a tree and pitched the tarp in its wind-proof configuration.

My goal was to hike about 70 miles from the 10 freeway to the Cougar Crest Trail near Big Bear Lake, then hail an Uber back to Cabazon and the car. I needed to be back home for midnight on Sunday night / Monday morning for a critical deployment meeting at work. It didn’t really sink in until Saturday morning just how risky this plan was, given that I would need to walk 70-odd miles and then find a way back to the car potentially late in the evening on Sunday, if everything went perfectly.

On Saturday I woke early and was on the trail at 5am, hiking through the rest of the wind farm by morning moonlight. As the sun came up over Whitewater Creek, I could hear the rushing water. The climb up Whitewater Creek and Mission Creek was very difficult, mostly because of the numerous trail wash-outs. At certain points I would lose the trail completely and find myself stuck in either endless sandy dry river bed areas, or trapped in dense bushes and oak trees. My GPS on the phone came in very handy.

I met a few hardy hikers going the opposite direction, the southbound (SOBO) PCT hikers having come all the way from Canada. One hiker shared how difficult he’d found this section, especially Mission Creek, and said he would have given up on the trip altogether if he wasn’t almost done.

Over the course of the day my spirits dropped lower and lower as I realized how impossible the task would be. My pace was slower than normal because of the time spent route-finding and bushwhacking and I was starting to doubt that I would make it. I decided to bail at the first opportunity which would be the 38 / 18 highway at the eastern edge of Big Bear, which I could hopefully make by morning.

I set my sights on the Coon Creek Cabin, an abandoned and very spooky cabin with no windows. One of the SOBO hikers had mentioned that he wished he had slept inside the cabin, noting that the gale-force winds outside the cabin made it impossible for him to sleep. He had decided to sleep outside the cabin after seeing how spooky it was!

Along the way, as the trail left Mission Creek and started to enter the alpine forest in the San Gorgonio Wilderness the surroundings started to become very beautiful indeed, and the trail was maintained a lot better and my pace picked up. Having found a spot of cell reception I called Jess and Gabriel and felt immeasurably happier after talking to them.

The Coon Creek Cabin is located at a beautiful group campground on the edge of an overlook. It is a log and cement cabin with no windows, and has been vandalized over the years and is quite creepy, like something from the Blair Witch Project. Having previously committed to sleeping in the cabin, and now finding the surrounding area far too windy for any comfortable sleep, I set myself up in one of the ‘bedrooms’.

All night the wind howled, and even with my earplugs in I didn’t get much sleep, every noise or near imperceptible creak I heard would trigger the hairs on my neck to stick up. Eventually though I must have slept because suddenly it was 5am, and time to continue.

The PCT comes very near a highway at Onyx Summit, and I was hoping to miraculously hitch a ride off the mountain early. Again I began my hike before the sun rose, although this time there was no moonlight and I traveled by headlamp.

As the sun rose I passed a property with groups of animal cages. Apparently it is a now-disused wild / exotic animal facility, where the owners would provide animals for film and television. I sped past, arriving at the highway at around 7:30am. I stuck a thumb out and watched as dozens of cars drove by, seemingly ignoring me and my predicament. Having no cell reception I was unable to call anyone or schedule a ride-share.

I got back on trail at about 8am, deciding that the next intersection with the highway would probably have better cell reception, or might be a better place to hitch a ride, and if I couldn’t hitch a ride I would be able to walk to Big Bear anyway, where hopefully some other solution would present itself.

When I finally hit the 18 at about 12pm, no miracle occurred and I was getting increasingly worried about my prospects of returning home. After unsuccessfully trying to hitch a ride from the intersection, I started to walk along the narrow highway into Big Bear, sticking out my thumb as each car passed.

My gloom was shattered as a van pulled over next to me. “Hop in,” cried the driver, and I did! This trail angel had been driving around the town trying to find SOBO thru-hikers to give rides into town. We started talking and he asked where I was headed. I said “the 10,” and he looked puzzled. I could tell he was disappointed that I had not walked all the way from Canada, but he begrudgingly said I could come with him on his way home to Los Angeles as long as I wouldn’t mind waiting while he packed up his cabin and picked up his dog.

Steve, known by his trail angel name of ‘Gorn’, has helped out hundreds of hikers over his many years having a holiday cabin at Big Bear. He was kind and hospitable, offering me food and drink at the cabin, showing me around town, and then dropping me off at a Starbucks on the 210 freeway just down from the mountain. From the Starbucks it was splendidly easy to hail an Uber.

The Uber took me back to the car, the car was intact and sprung to life, and I was home around 7pm and the midnight deployment went off successfully!

The takeaway from this hike for me is never to have work plans, or even any time-critical responsibility on the end of a hike, especially one where long miles are involved. Also, it is generally less fun to hike when there is a ridiculous mileage goal, unless that goal is self-imposed. I am so grateful for Gorn’s kindness and the random luck of running into him, and will plan my trips a lot better next time.

← Minor Hardship and a New P.R.
An Epic Voyage at Sea →